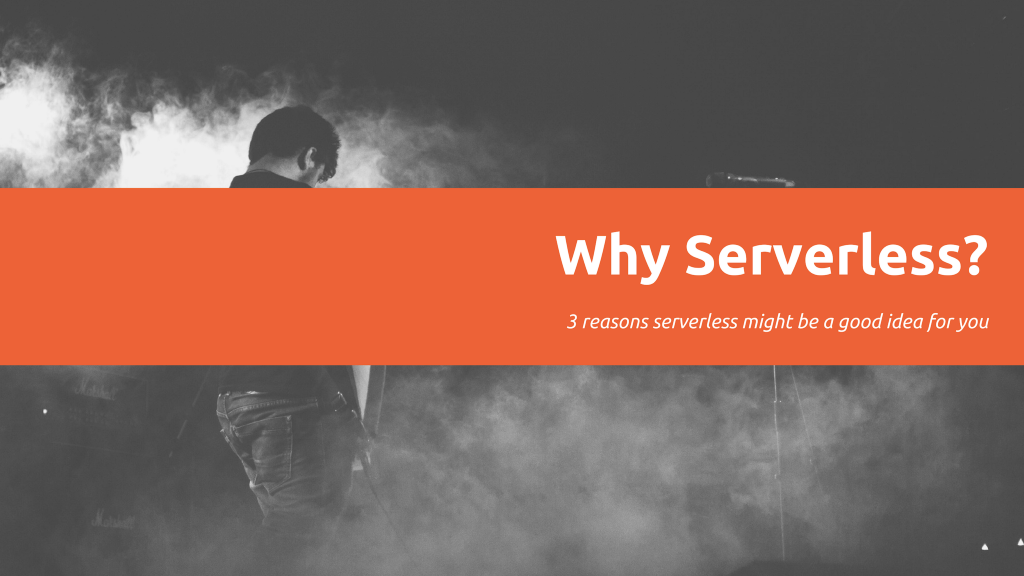 3 reasons serverless might be a good idea for you

The innovation in the tech industry paved a new way for infrastructures as a service — bringing a new paradigm shift from infrastructure and hardware ownership to a subscription and capacity on demand model. In minutes, you can now spin up several instances of virtual servers across multiple regions and dramatically reduce your time to market.

While this is still happening right in front of our eyes, a new era of serverless architecture is also rapidly unfolding in parallel taking away the worries of having to even manage servers. With serverless, you no longer even have to know the underlying operating system that is running your application.

Serverless offers developers the ability to quickly experiment with new ideas and fail fast while moving forward — allowing teams to focus on what matters (code) while the undifferentiated heavy lifting is managed by others.

If you are not satisfied with your current architecture or thinking of launching a new idea, here are three reasons serverless might be a good idea for you.

#1 Serverless reduces your time to market

Hiring developers is hard — and finding engineers with the right set of skills for your product needs is even harder. Not only do you have to find developers who can transform your product ideas into code, but also those who can manage the underlying infrastructure that supports your code.

With serverless architecture, your development team can concentrate on writing functions that are tied to your business value, and deploy them in minutes with security, logging and scalability.

Yes, you read right! As ridiculous as it may sounds, running apps on a serverless environment is a way cheaper than you thought.

The startup phase is characterized by lots of experimentation, followed by continuous iterations designed to test and validate ideas. During these early stages, keeping your costs as low as possible helps to extend your runway.

There are lots of examples of teams migrating to serverless and significantly reducing their costs. No longer do teams have to bear the pain of managing and monitoring servers in development, test, and production environments — or paying for idle EC2 instances.

#3 Serverless scales with your idea

Startups can grow at a rapid pace — and sooner or later scaling becomes a pain point. The last thing a startup wants to get in the way of their growth is infrastructure constraints.

While some startups address the problem by throwing more resources at the underlying infrastructure, it usually requires some reengineering of the existing architecture to effectively scale — with significant costs.

The ability to scale is an area where serverless shines. With the proper architecture, a startup can rapidly scale as your business grows without massive investments in additional infrastructure.

How much does it cost every month to run 70 #lambda per second? $579. @acloudguru @samkroon #ServerlessConf

TL;DR Serverless is not just another buzzword

Like any new technology, there is always a cloud of skepticism around and more often you hear words like Serverless is not ready yet or it’s just another buzz word.

The truth is more companies are embracing serverless architecture than ever. Netflix, Coca-cola, Codepen, Bustle, Capital One, Verizon, and Nordstrom are all actively using Serverless in production.

Are you ready for serverless?

Why Serverless Architecture? was originally published in A Cloud Guru on Medium, where people are continuing the conversation by highlighting and responding to this story.