The Rise of the Serverless Architect 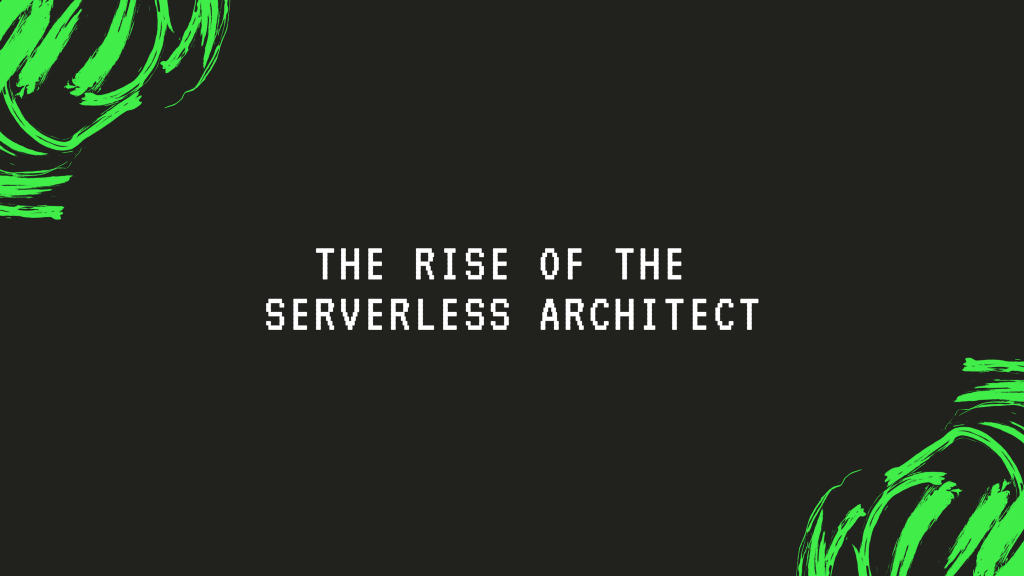 The Rise of the Serverless Architect

The focus has expanded to the entire application lifecycle

Over the last 4 years of developing the Serverless Framework, and working closely with many of the thousands of organizations that use it to build their applications, I’ve had the good fortune of watching the movement evolve considerably.

In the early days I met countless pioneering developers who were utilizing this new architecture to build incredible things, despite the considerable challenges and relatively crude tooling that existed.

I also worked with many of these early pioneers to convince their organizations to go all-in on Serverless, despite the lack of successful case studies and tried and true best practices — often based simply on an internal POC that promised a shorter development cycle and lower total cost of ownership.

As the tooling has evolved, and the case studies have piled up, I’ve noticed that these early Serverless pioneers have forged a new title that is gaining prominence within organizations — that of Serverless Architect.

What is a Serverless Architect?

Early on in the Serverless journey, when we were initially developing the Serverless Framework (in those days known as JAWS), all of the focus was on development and deployment.

It was clear that this new piece of infrastructure called Lambda had some amazing qualities, but how could we as developers actually build something meaningful with it? And seeing as how Lambda is a cloud native service, the question that followed shortly after was: how can we actually deploy these apps in a sane way?

As various solutions to these problems were developed and improved upon, the focus of developers building Serverless applications expanded to the entire application lifecycle, including testing, monitoring and securing their Serverless apps.

A Serverless Architect is a developer who takes this lifecycle focused view and often personally owns at least part of every stage of the Serverless Application Lifecycle. They don’t simply write functions — they implement business results while thinking through how the code that delivers those results will be developed, deployed, tested, monitored, and secured.

Why is the Serverless Architect essential?

Serverless architectures are essentially collections of managed services connected by functions. Because of this unique and novel model it’s important that the architect has a deep understanding of the event-driven, cloud native paradigm of the architecture.

The demand for the Serverless Architect is a direct result of the unique nature of this architecture and the Serverless Application Lifecycle that accompanies it. Unlike legacy architectures, these various lifecycle stages are no longer separate concerns handled by separate teams at separate times — but rather a single integrated lifecycle that needs to be addressed in a unified way.

There are a couple specific reasons this is the case with Serverless:

As organizations mature in their Serverless adoption, the demand for these Serverless Architectures grows quickly. While one person thinking this way in the early days is often all that is needed to get adoption off the ground, it often takes teams of Serverless Architects to scale to a ‘serverless first’ mindset.

What types of tooling does the Serverless Architect need?

As Serverless continues to grow in adoption and the number of Serverless Architects continues to increase, it’s becoming clear that unified tooling that addresses the entire Serverless Application Lifecycle is going to be increasingly valuable.

Cobbling together multiple complex solutions is antithetical to the whole Serverless mindset — and if that’s what’s required to be successful with Serverless than somethings gone wrong.

At Serverless Inc. we’re evolving the Serverless Framework to address the complete application lifecycle while maintaining the streamlined developer workflow that our community has grown to love. We’re working hard to ensure that Serverless Architects have the tools they need to flourish and we’re always excited to hear feedback.

Sign up free and let us know what you think.

The Rise of the Serverless Architect was originally published in A Cloud Guru on Medium, where people are continuing the conversation by highlighting and responding to this story.